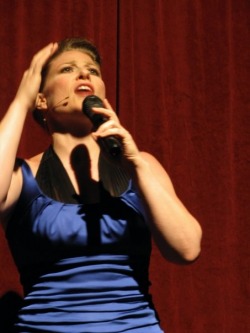 A Wonderland at The Ohio Theatre's 16th Ice Factory Festival (2009) was a huge success, with sold out, oversold, and standing room only audiences every night.

A Wonderland  Reviews:
"Janelle Lannan, playing Alice, has a supple and vibrant voice and a self-assured presence that is just a pure pleasure to listen to and watch, especially in what is probably the best song in the whole show, 'The One.'"
from http://www.scene4.com/qreviews/2009/07/a_wonderland_by_eamonn_farrell.html

"And many of the corresponding characters are fleshed out wonderfully by a cavorting cast: most notably our campy and lost heroine (Janelle Lannan)..."
from http://obscenejester.typepad.com/home/2009/07/the-logic-of-nonsense.html 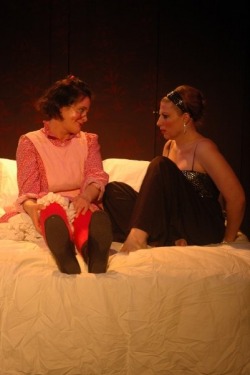 (2009 Fall) [Although unfortunately there were no reviews from publications, Janelle received an overload of recognition from her fellow EAT members for her work in Thank You, NannyAnnie, including an intermission interruption from the amazing Vinnie Costa with eyes bugged out and accolades a-flying.]

(2009 Spring) Burying Mom:  "Featuring ... marvelous performances by Raker, Janelle Lannan as his wife, ... Burying Mom is the standout of the evening."
http://www.stagebuzz.com/2009/03/review-spring-eatfest-09-series.html

(2008 Spring) The Food Monologues: "...particularly effective... “Found” features Janelle M. Lannan as Suzanne, a young woman in the middle of a binge, trying to figure out her relationship with food and with her husband. ... Lannan is particularly adept at showing both the humor and horror of her bingeing."
http://www.oobr.com/top/volFourteen/three/eatfestaspring2008.htm

(2007 Fall) Safe: "Set during a series of sniper attacks in an unnamed city, Safe shows Len (Tom Greenman) and Claire (Janelle M. Lannan), a young couple cowering in the darkness while trying to protect themselves from a killer. The play is a study in fear and paranoia, but it never really coalesces into a message. Despite this, it is a suspenseful and terrifying piece due to Ian Streicher’s taut direction and some excellent work on the part of the actors."
http://www.oobr.com/top/volThirteen/ten/eatfestcfall2007.htm